For the past few weeks we’ve heard mixed reviews regarding Buenos Aires. And while I wouldn’t go as far as to call it the Paris of South America as some people do, it is vibrant and we loved it!

As with travel in any big city the people you meet can make or break your experience. Fortunately for us the fellow wanderers we met in BA were downright delightful. We’re big advocates for hostel travel – afterall hostels aren’t everyone’s idea of honeymoon accommodation. But for us the chance to meet people from all around the world and gain local knowledge coupled with the opportunity to cook and save money far outweighs staying somewhere that you’re isolated and more often than not has no character. Chillhouse reinforced this belief . The hostel was one of the best we have stayed in, not just in South America. The staff were super helpful, the decor was eclectic and the layout perfectly designed to encourage mingling and a relaxed vibe.

We spent most nights sitting in the living room of the converted house in Almagro chatting, drinking and listening to those with musical talent play guitar. In typical Argentine fashion we all pitched in for an asodo (bbq) which we enjoyed on the rooftop terrace until we got rained out.

Occasionally, we meet someone who we really click with. They’re not normally 19 years old though. Matt made us want to travel back in time and slap some sense into our past selves. He was mature, independent and had just spent the past four months travelling South America by himself, 6 weeks of which he spent learning Spanish. At 19 we were just getting our shit together enough for a 10 day trip to Bali.

Anyway, Buenos Aires was much more than hanging our hostel and here are a few of our highlights:

Graffiti isn’t illegal here as long as you get permission from the owner of the wall. Usually artwork is preferable to a boring white wall, which the town planning here has ensured there is an abundance of. If the neighbour doesn’t like it too bad.

This mindset means there is no need to rush or paint wearing a balaclava at night time. The result is amazing pieces of public artwork scattered about the city, some of which even have the artist’s email address on. The acceptance of graffiti is especially reflected in the stencil art here. Stencil art was originally designed to speed up the process. Here there is no need and the stencil art is impressively complex.

Spray paint is quite expensive in Argentina and consequently some artists have adapted by using very little (as below) or by using different materials such as tar or ordinary paint.

Riding around in BA’s bicycle lanes it was great to hear about three teenagers who used to tag their names everywhere and have now honed their skills as street artists. Maybe there is hope for the little shits back home, then again they don’t have the supportive environment that BA offers so perhaps not. In fact many graffiti artists use this city as an opportunity to practice in broad daylight. 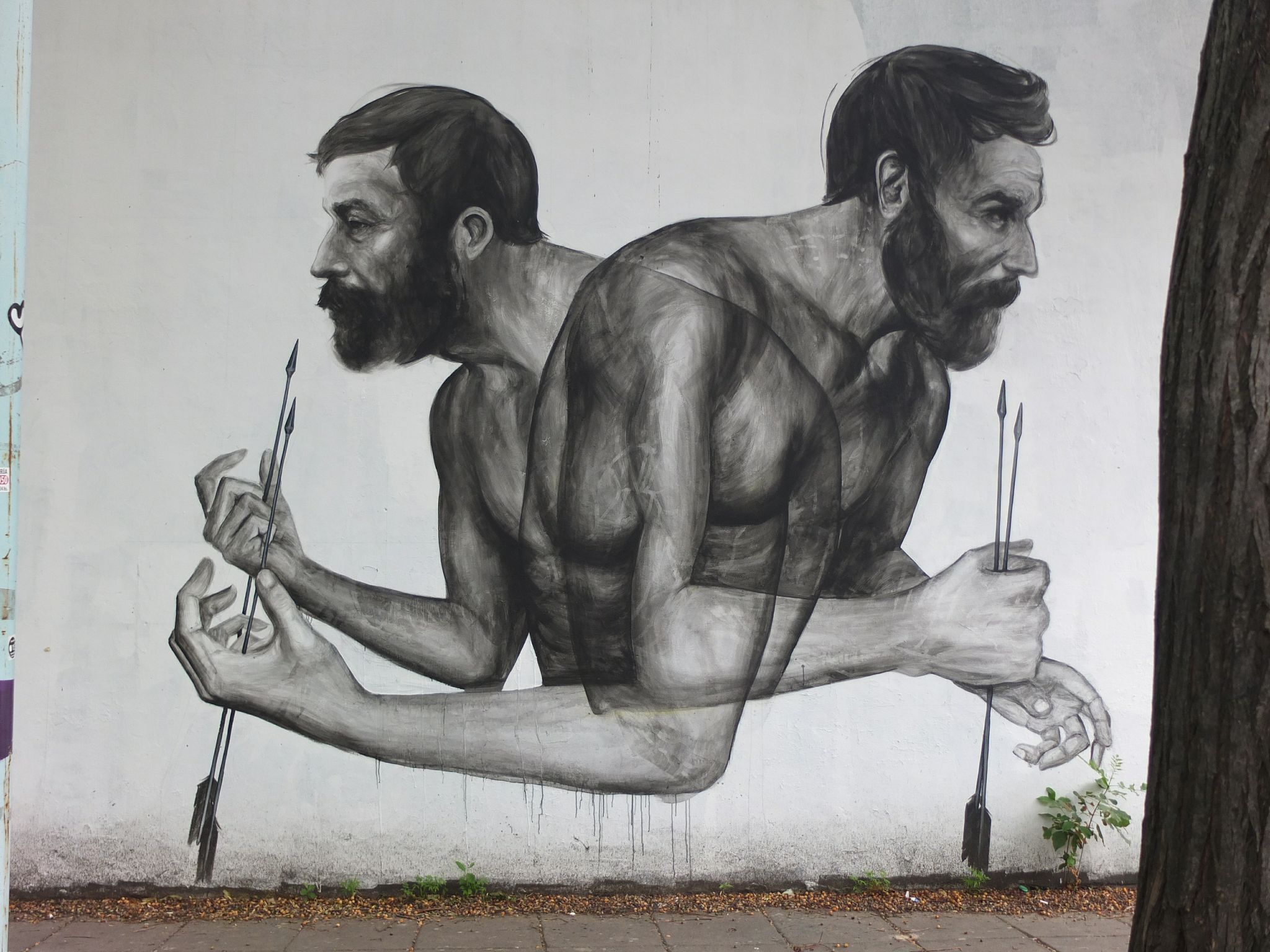 Even the president and mayor graff up the walls here. Hence why they can’t exactly tell anyone else off for following suit. As well as political propaganda, there is some intelligent artwork here voicing opinions on society,  for example the piece below is a comment on football violence in Argentina. Other pieces are cutesy and bright, an opposition to the depressing black and white anti-government graffiti that sprung up around the time of the financial crash here.

We visited a local studio where a group of artists flesh out their ideas before taking them to the streets and ended our tour at Post St Bar. The owner asked a group of graffiti artists to decorate the space for him. When they asked how much he would pay them, he replied he didnt have any money left, so they struck a deal where they get to use a few back rooms as a gallery. It has since become the place to leave your mark if you’re a visiting graffiti artist.

When I told Niall checking out a cemetry was on my list of things to do in BA he looked at me like I was a wee bit crazy. But Cementerio de la Recoleta is no ordinary cemetry. It is where the rich and famous are buried, and consists of streets lined with statues and crypts. It probably wouldn’t be appropriate but we couldn’t help thinking a kick ass game of hide and seek could be had here.

No trip to BA would be complete without hitting up a Parilla (steak house) or two. It’s not very often you can convince a group of backpackers to ditch their budgets in favour of a fancy restaurant meal, but we managed to and with help of Matt’s spanish, booked a table for 11 at La Cabrera. The restaurant came very highly recommended and while it wasn’t the best steak we’ve had in Argentina it was a night to remember. We were given a private room with three waiters who were wonderfully attentive and had a great sense of humour.

When the food was served there was not a spare inch on the table. Each huge slab of meat was accompanied by four delicious side dishes. You’ll just have to take my word for it by the way because Niall brought our camera but left the battery on charge back at the hostel. The red wine was amazing, as you’d expect and the bill is delivered with a tower of lollipops to choose from. Oh yeah we’d spent it up but it was worth it for our last night in BA.

Buenos Aires is known for its nightlife and for the fact that nothing really kicks off until 2am. Not wanting to catch a cab to Palermo we decided one night to go for a drink at a local neighbourhood bar. What we stumbled upon on our way there was far more interesting. A traffic intersection had been closed off – bunting lined the streets, a bbq was roaring while music was played from a stage up one end and a bar selling litre glasses of  beer swarmed with people down the other .

We weren’t really sure why it was happening, my guess was a cultural arts weekend. Whatever the reason it was a good way to spend the night in a local neighbourhood, where guys aren’t afraid to shake their hips to the music and everyone greets each other with two kisses.

The owner of our hostel gave us a map upon arrival and proceeded to put huge crosses through pretty much all of the La Boca neighbourhood. Too dangerous for gringos to be walking around there, even in daylight.  So following his advice we visited La Boca, sticking to the main street Caminito. We walked through the market and saw tango dancers busking for change,  but mostly we admired the colourful houses that the neighbourhood has become famous for. Well that and its futbol team whose fans rioted through the city two days after we left. Spanish and Italian immigrants moved to this meat packing district in the late 1800s and after painting the shipping barges they used the leftovers for their own homes. 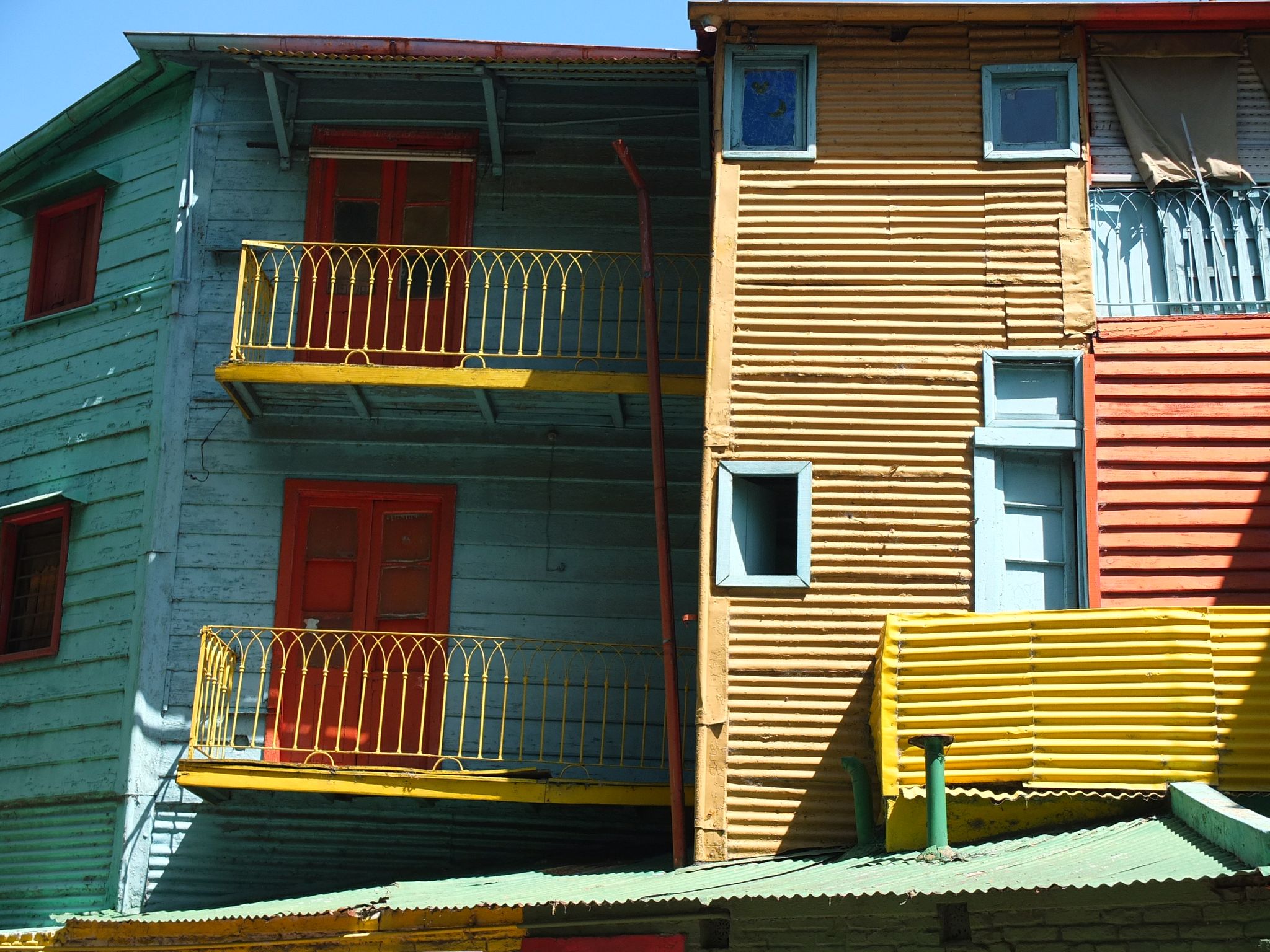 These Sunday markets are not you’re average variety. Starting on Defensa St from Plaza de Mayo, they stretch as far as the eye can see to Plaza Dorrego.

It is not very often I curse travelling with a backpack rather than a suitcase but there was such a cool collection of antique items to be bought. There were also the standard modern market bits and bobs for sale too; photographs,  jewelry and of course mate cups. Mate is a traditional and very popular drink here in Argentina. It is similar to green tea and made from yerba mate which are dried chopped leaves.

It is a very social drink, each person in the group takes turns sipping through the bombilla, a silver straw with a bulb on the end, before passing it on. Everyone loves it-old, young, rich, poor, it doesn’t seem to matter.