This was a no-brainer for us. The alternative? Three flights in a row with a 10 month old- hmmmm no thanks. She’s a good little traveler but we didn’t want to push our luck.

Instead we opted for a mini-vacation spent exploring a different side to Singapore. We stayed in Changi Village, which as you may have guessed from the name is located conveniently close to the airport. There’s no MRT station nearby but the area is serviced by plenty of buses. We mostly walked and caught taxi’s though as it’s legal for bub to sit on your lap in the back seat. We were a bit apprehensive that Little Miss would get used to this and whinge when we put her in a car seat back home but she’s been fine- phew!

Anyhoo, here’s the run down on our sweeping visit to Singapore:

Village Hotel Changi, by Far East Hospitality – is a fairly stock standard hotel with a few additional perks. One of which is a rooftop pool overlooking the South China Sea (there’s also one on the ground floor). On the sixth floor you’ll also find a fish pond where you can feed koi food purchased at reception for $2 a bag. To be honest, I think Niall and I enjoyed this more than Little Miss- she was busy watching the birds instead, typical. Village Hotel gets bonus points for the room upgrade and free late check out!

Changi Boardwalk – this 2.2km walk provides a scenic look at Singapore’s east coast. Starting near the boat terminal, you can spot bumboats ferrying passengers to nearby Pulau Ubin. Further along are sailboats and wildlife to spot such as birds and monitor lizards. 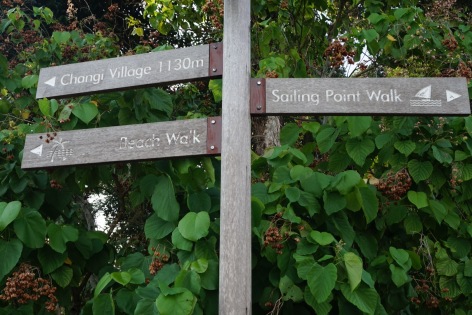 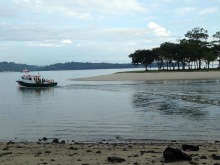 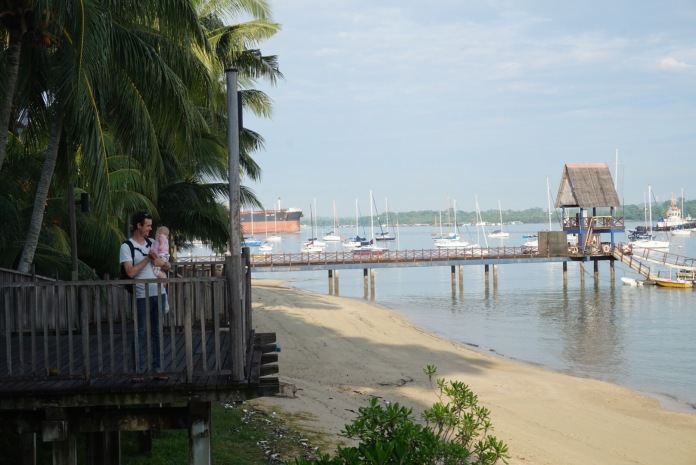 Changi Beach – sits across a small bridge from the boat terminal. There are BBQ’s, play equipment (age-specific of course) and paths for a leisurely stroll or ride.

River Safari – we were tossing up between visiting Pulau Ubin and the Singapore Zoo River Safari. In the end we decided it was probably too hot and humid for Little Miss to enjoy a walk around the island so we made our way north to see some fishies, and a whole lot more! The River Safari ($30 per adult, under 3’s free) was actually much more interesting than I was expecting. The park is broken up into several world rivers such as the Nile, Mississippi, Mekong, Ganges etc. As well as aquariums, both big and small, there were a few enclosures with land animals in such as the squirrel monkeys which Little Miss loved watching run about the place. There were also Kai Kai and Jia Jia the two resident giant pandas who were just adorable going about their day, munching on bamboo (they eat 20kg everyday!!). 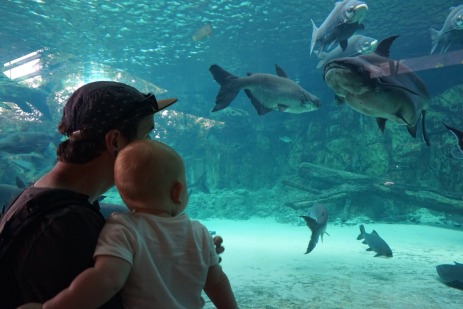 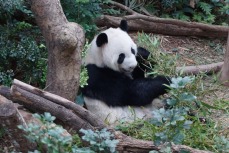 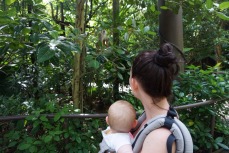 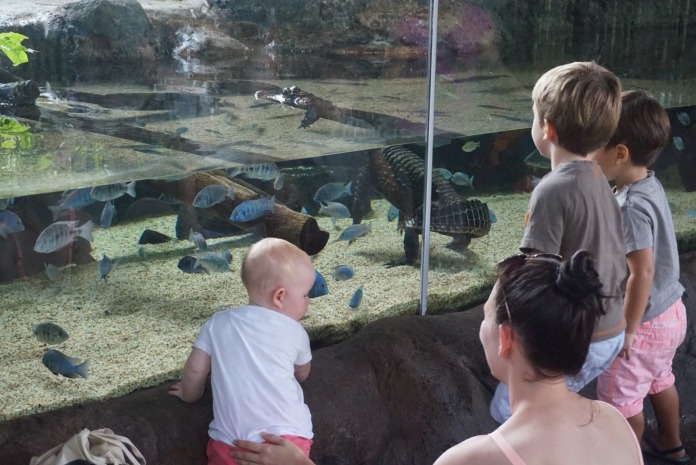 Changi Village Hawker Centre – is known for its Nasi Lemak, a dish of rice infused with coconut milk and pandan leaves, accompanied by deep-fried chicken (or fish), fried anchovies, peanuts, egg, cucumber and a side of spicy sambal- yum! A number of stalls serve Nasi Lemak however lines (and a bit of online research) seem to suggest the International Muslim Food Stall is king. If like us, you’re willing to forgo the best in favour of a shorter queue, then Mizzy’s Corner (#26) dishes up a scrumptious version for $3.50 a plate. My mouth is salivating just thinking about it, and I don’t even eat deep-fried chicken usually. 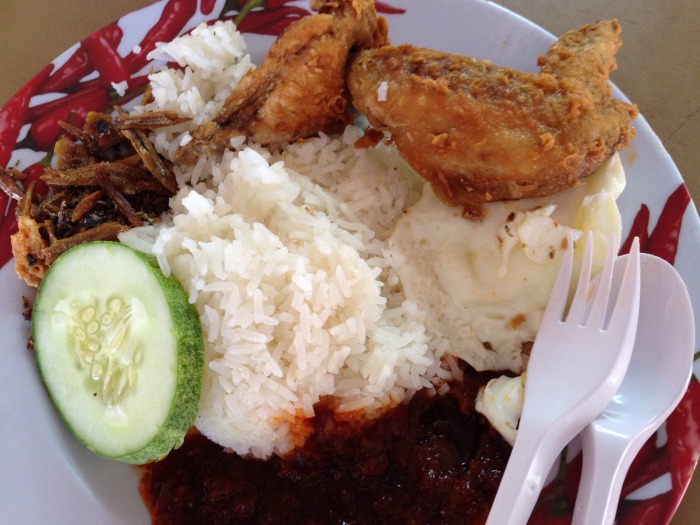 Another dish worth mentioning is the Ipoh Hor Fun from Weng Kee (#19, but sometimes taking orders from stall 18). This Malaysian dish includes thick flat rice noodles, mushrooms, water spinach, chicken, pork and seafood drowned in a lip-smackingly rich chicken sauce and topped with some crispy dumplings. So good! If I’m now presented with a choice of Kway Teow or Hor Fun, it’ll be Hor Fun all the way! 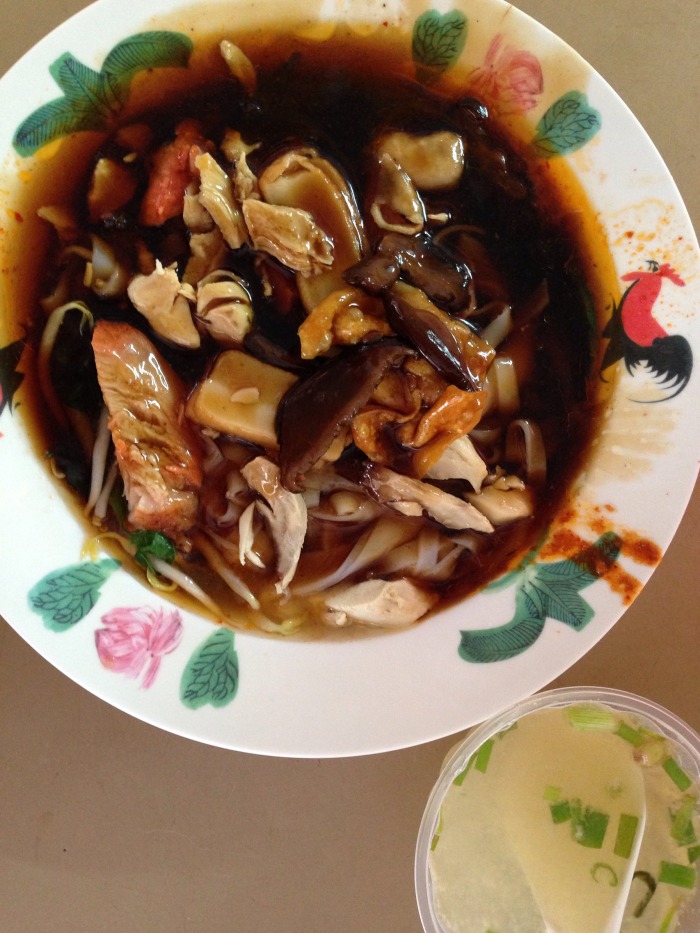 Little Island Brewing Co– OK let’s be honest, the fact that a craft brewery lies within walking distance of the hotel was a major selling point for Changi Village. With a unique serve-yourself system, patrons are required to place money on a card which you then tap to pour from the keg of your choice. A selection of brews are rotated every two weeks, which is a bit unfortunate as we would’ve really liked to try their red ale, Ruby Tuesday. In addition to beers, of which our personal favourite was the Singapore Pale Ale, there is also cider and wine on tap. While there’s no play equipment, the brewery is family-friendly with a kids menu, children’s cups, cutlery, drinking water and highchairs available. 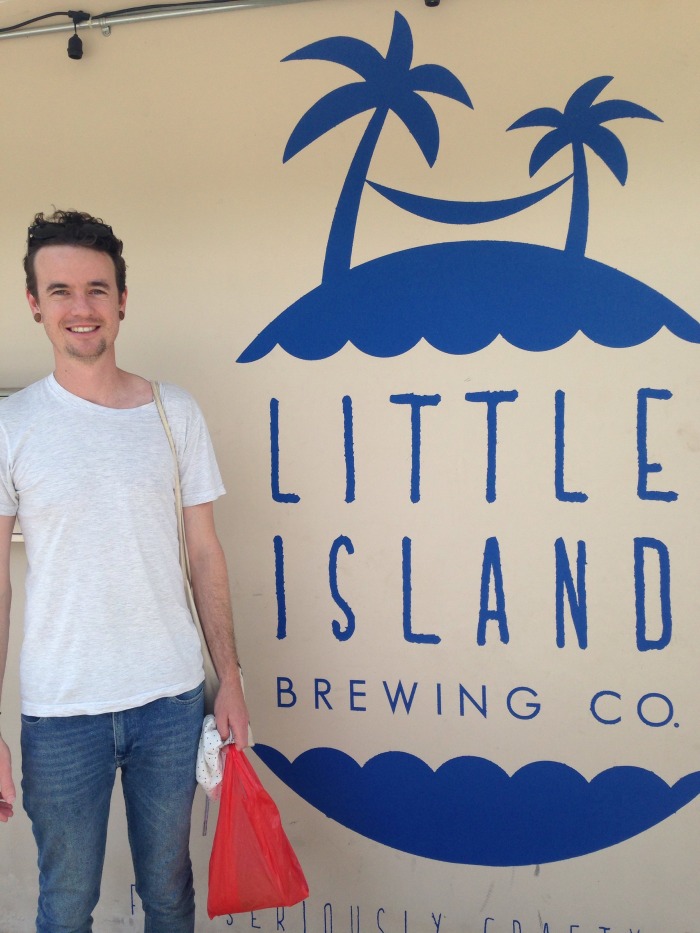 Singapore definitely feels like a second home to us. Each time we visit we end up discussing how we can move here. I’m sure the nanas wouldn’t mind if we relocated Little Miss- it’s only a short flight from Perth right?

Next up: Phu Quoc, a tropical island with ambitions to rival Singapore in terms of tourism. Subscribe to get it delivered to your inbox.