In three weeks we’ve managed to eat our fair share of Vietnamese food. This is a country where eating is as much a tourist attraction as the hills of Sapa or islands of Halong Bay. That’s why we thought it deserved a post all to itself. So here’s our two cents on food and drink in Vietnam:

Pho – when thinking of Vietnamese food, many people automatically think Pho. Niall was ridiculously excited to try this noodle soup when we got to Ho Chi Minh. With so much hype around its greatness I had slightly lower expectations but it turned out to be pretty flavoursome! Niall on the other hand had such high expectations that he was a bit disappointed to find it wasn’t much better than other noodle soups we’ve had elsewhere in Asia. In Hanoi, it came with a savoury donut stick (quay) to dip in the soup. We didn’t know this at the time though and as the lady (who spoke no English) brought it out first we incorrectly assumed it was an appetizer. When we started eating it she thought it was hilarious!

We ate both the beef variety (bo) in the south and chicken (ga) in the north. In each region we asked the guesthouse staff where they eat to make sure we were eating the good stuff, and I think it’s safe to say the north won this round. 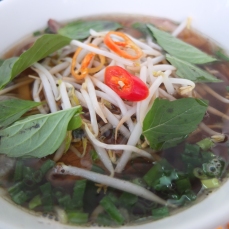 Bahn Xeo – knowing me well Niall predicted that after Pho I would go straight to this dish for my next meal. Banh Xeo is a savoury pancake filled with pork, shrimp and bean sprouts served with a sweet and sour sauce. In the south it was served with lettuce and basil, while in Hoi An it is eaten more like a taco, wrapped in lettuce and rice paper. Either way it is delicious and on my list to try cook when we get home. Thit Kho To – this tasty claypot dish contains caramelised pork, a thick ginger sauce and spring onions. The pork can also be replaced with fish or eggplant.

White Rose – these bite-size shrimp dumplings are a specialty in Hoi An. In fact, one family passes the recipe down from generation to generation and stocks all the restaurants in town. The translucent dough is made from ground rice from the Mekong Delta and water from the Ban Le well that has been purified and filtered over 15 times. They’re worth a try. 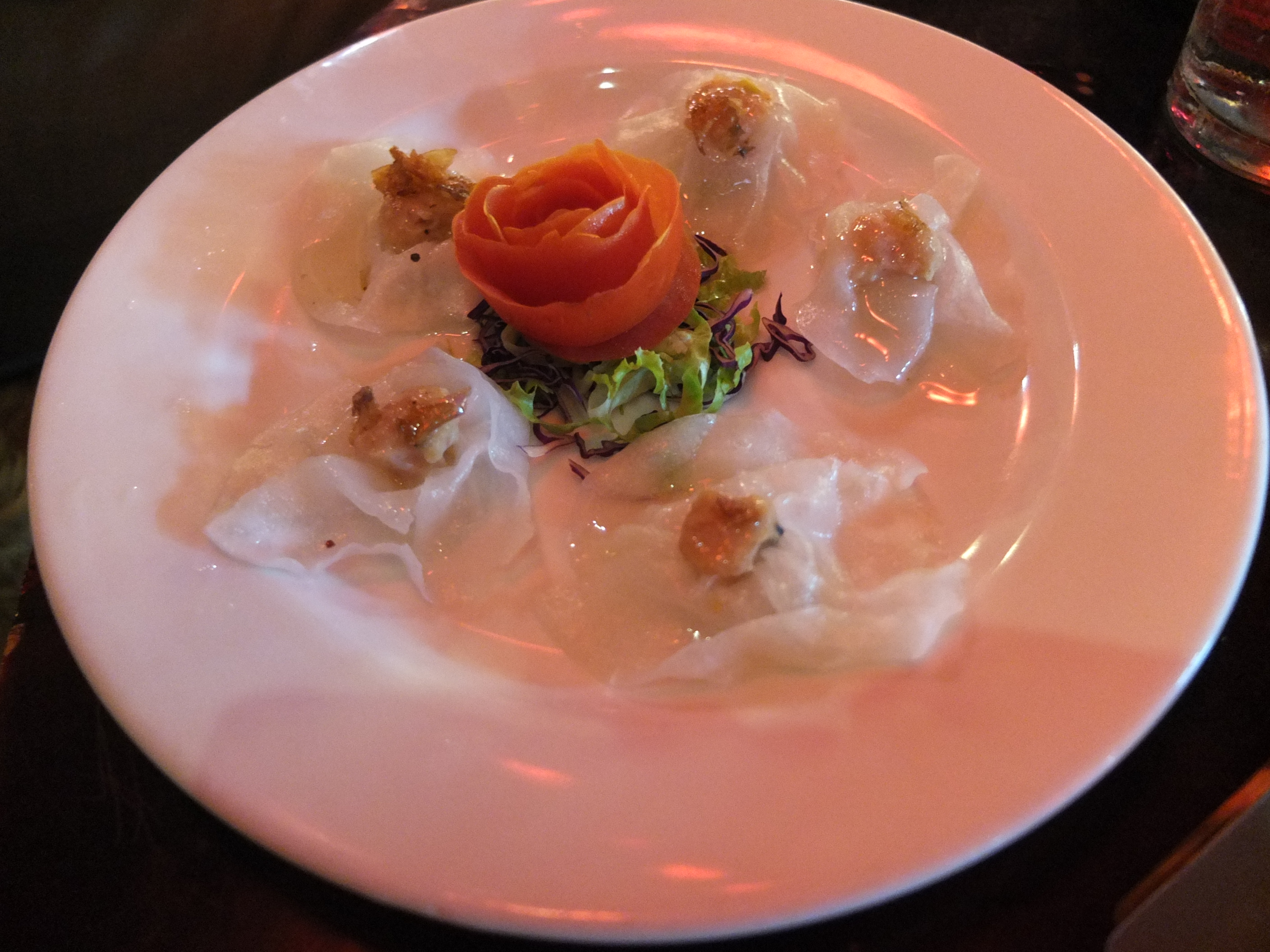 Cao Lau – another Hoi An specialty and possibly the most underwhelming food I ate in Vietnam. This dish relies on water from the surrounding wells to form brown and chewy noodles which are served with a little bit of broth, pork slices, crispy croutons, chilli, lime and herbs. Given the ingredients you would think the result would be amazing but it just wasn’t.

Banh Mi – I think Niall’s reaction when he took his first bite of Banh Mi pretty much sums up the incredible explosion of flavour in our mouths. It went as follows ‘oh my god, oh my god, this is the best thing I’ve ever eaten, oh my god’. Suffice to say we went back for seconds the following day. This Vietnamese baguette was by far the best thing we ate in Vietnam.

Now, I should point out that not every Banh Mi in Vietnam is this good. We ate our first at Banh Mi Phuong in Hoi An, which is widely regarded as the best Banh Mi stall in the world. I’m sure by now you’re wondering how on earth a baguette can taste so good? Let me start by saying this is no normal baguette. The Banh Mi Thit Heo Voi Ham Va Pate baguette is freshly made then filled with two types of pork, at least three types of mouthwatering homemade secret sauces, pate, pickled cucumber and carrot, coriander, tomato and spring onion. All for $1.

It was so good we couldn’t bring ourselves to try it elsewhere for fear of being disappointed. That was until we took a food tour in Hanoi. As suspected it did not measure up, but was still yummy enough. Again there was pork, pate and pickled carrot, but also cabbage and pickled papaya. It was topped with tomato, chilli and mustard sauces and then toasted.

If we return to Vietnam one day, Hoi An will be on the itinerary purely so we can eat at Banh Mi Phuong again, it was that good.

Fresh spring rolls (Goi Cuon) – we expected to eat tons of these in Vietnam but surprisingly fried spring rolls are far more popular. Luckily, we learnt to make these ourselves in our cooking class, along with a delicious peanut dipping sauce that is similar to satay.

Bun Cha – is a Hanoi specialty. Bun is a type of round rice noodle and Cha means BBQ pork. The pork and broth are the stars of this very tasty dish. 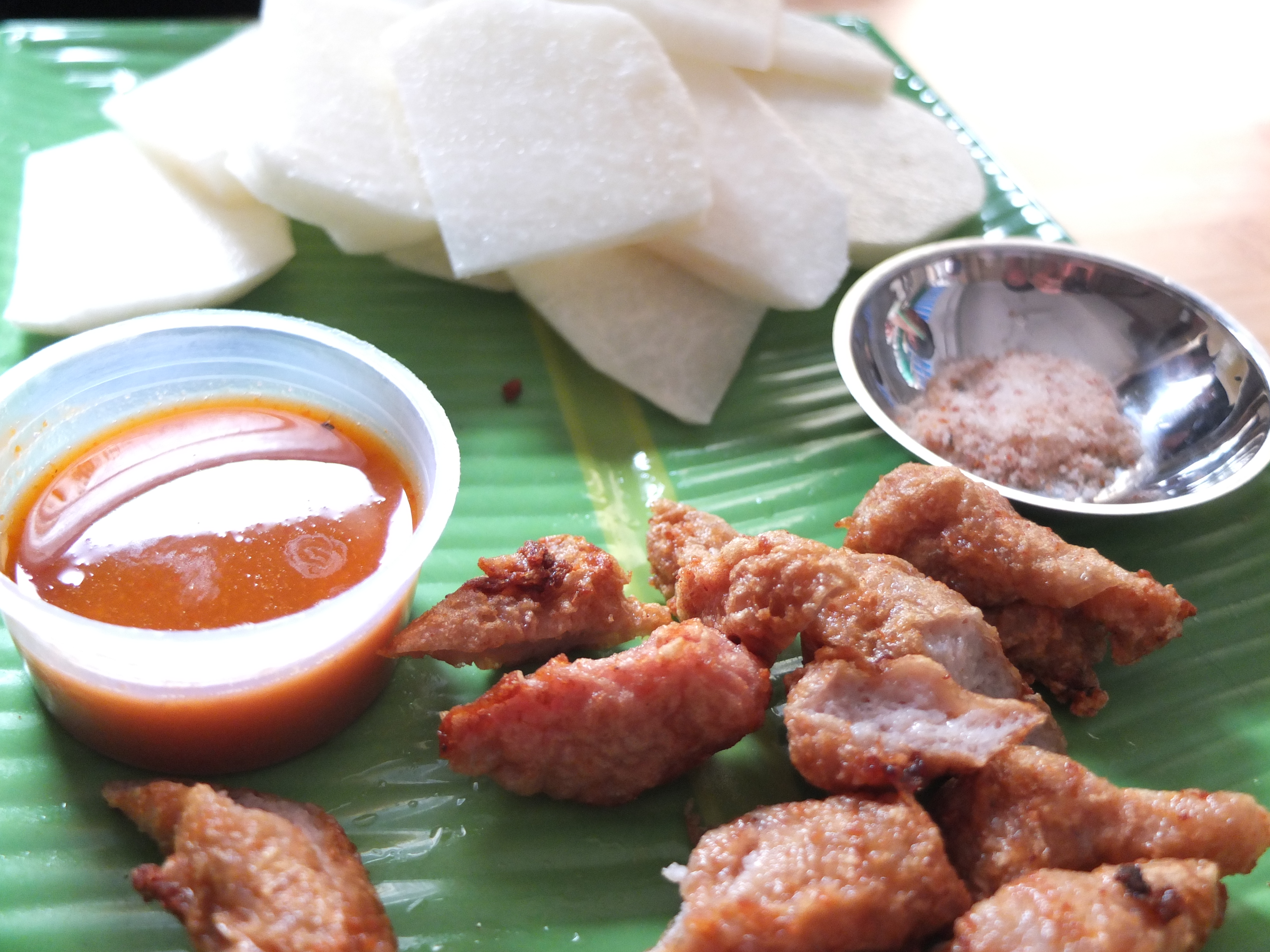 Bun Bo Nam Bo – we first tried this dish on the Food on Foot tour in Hanoi and it gets our vote for tastiest noodle dish in Vietnam. Thinly sliced beef is marinated and quickly fried in garlic. It is then added to a bowl of vermicelli noodles with herbs, bean sprouts, crushed peanuts and fried shallots. Finally a ladel of sweet and sour broth is poured over the top. You then mix it all up and can also add condiments like chilli sauce if you want but it’s really not neccesary. So good. I want more and will attempt to cook this when we get home.

Vietnamese salads – unfortunately I don’t know the correct name for these. The first is a Vietnamese take on a fruit salad. It’s sweet and especially refreshing after walking around the busy streets of Hanoi. Made with tropical fruits like jackfruit, mango, dragonfruit and papaya it also contains condensed milk which is then mixed with spoonfuls of crushed ice. Yum!

The second is a salad from Hoi An made from banana flower, papaya, mint, coriander and basil. It’s served with rice crackers which are used to spoon this well balanced mix into your mouth. Drinks – as well as fruit smoothies, sugarcane juice is a popular cool drink to quench the thirst with. Squeezed through a machine to get the juice out, it is then mixed with lime or kumquat. Great for a sugar hit.

If that doesn’t do the trick then Vietnamese coffee should. With a high caffeine content the coffee here is strong, sweet and has hints of velvety chocolate. Cafe Trung Nong, which translates as hot egg coffee can also be found in a few cafes. It is basically served with condensed milk on the bottom and frothed egg yolk whisked with sugar and milk on the top, resembling a cappuccino. Mix it together and enjoy.

If you know me, you’ll know that I dislike tea, which quite frankly is a pain in Asia where it is offered all the time. However, I quite liked Tra Chanh, a lemon ice tea that isn’t too heavy on the tea side. It is served on pavements along with sunflower seeds to munch on while people watching.

Of course this isn’t everything. A lot of the time we just ate rice and veg like morning glory (water spinach). Sometimes seafood or a sneaky pizza when we couldn’t fathom anymore rice or noodle.

It is amazing how with the same base ingredients the Vietnamese make such a variety of dishes. As delicious as it has been, we must admit we are pretty excited to get to Nepal where they don’t love cooking with meat and copious amount of oil quite so much. Bring on the momos, curry and naan.

3 thoughts on “Eating our way through Vietnam”