Travelfish, who we look to for advice on travelling South East Asia, informed us that we should ‘count on getting lost’ in Hanoi. No worries, we thought, getting lost is part of the fun.

Finally, rather frustrated, we stopped in at a cafe with wifi to look up a map on the hotel’s website. It was here we discovered the source of our problem. There are two streets with the same name in the same neighbourhood. One has an intonation that goes up at the end while the other goes down. One means shoes, one means paper. I still don’t know which one our hotel is on, just that all drivers assume it’s the one we’re not on.

I wish I could say that was the only time we got lost in Hanoi. Alas it was not. But as I said, without our backpacks on, it was much more enjoyable. Hanoi is one of those cities that despite having few major tourist attractions, still has a certain charm about it. With interesting tree-lined streets, laneways, lakes and plenty of cafes to escape the cold, Hanoi has a realness that is missing from Hoi An. 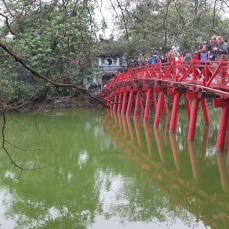 Of course, I can’t write about Hanoi without mentioning the traffic. This city of nearly seven million literally has millions of motorbikes. All of which are always in a rush to get somewhere and feel the need to beep constantly. Never in an agressive manner mind you. Our food tour guide joked that the traffic lights in Hanoi have three colours – green means go, orange means go, red means go.

The food tour was a highlight of our stay in Hanoi (see our eating our way through Vietnam post). For two and a half hours we stuffed our faces with scrumptious local delights while learning some interesting facts about the city, like the reason for so many hole in the wall joints is because they get taxed by the width of the shopfront. Also, that it is illegal to park your motorbike, set up stools or sell merchandise on the sidewalk. No one really obides by that last one though. Seeing people rush to move their bikes or stand and pack away stools when the police pull up is a common and amusing sight.

We had to share many a dish on the tour just so we could fit it all in. Fortunately, we walked between spots otherwise we would have fallen into a serious food coma. As it was we spent over an hour after the tour finished sitting in a plaza watching locals skateboard.

Like many people, we used Hanoi as a base to visit Halong Bay and Sapa, so we spent most of our time just wandering about, occasionally stopping at a cafe or bar to people watch.

The one place we made an effort to visit was The Temple of Literature. Originally a temple dedicated to Confucius, the grounds became Vietnam’s first university. It was pretty cool to see as it was built in 1070, and features some interesting architecture and peaceful gardens. There are also over 30 large stone turtles (a magical animal in Vietnam, representing longevity) which have inscribed the names of graduates over the centuries. These days the complex is used for cultural and educational events.

Next up, heading north to Sapa- the highlight of our trip to Vietnam.

2 thoughts on “Getting Lost in Hanoi”