Move over Ella. Watch out Luang Prabang. There’s a new contender for our trip’s most relaxing destination- Kampot.

Known for its delicious pepper, Kampot is a peaceful riverside town with a completely different feel to Siem Reap and Phnom Penh. We did an awful lot of nothing during our stay, particularly the days we spent in a rustic traditional style bungalow on the river at Samon Village. 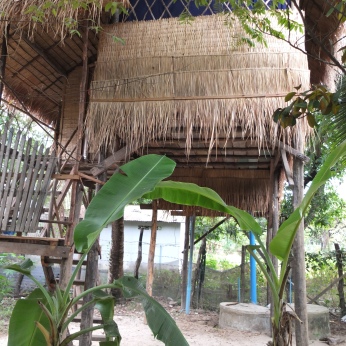 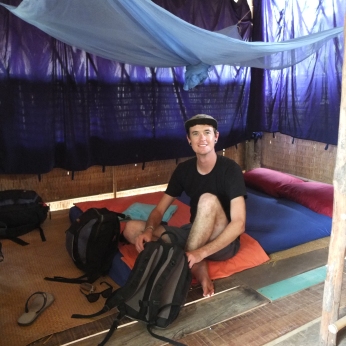 But when we did pull ourselves away from reading and the like here’s what we got up to:

Sunset & firefly river cruise- a must do in Kampot. Not only is crusing along a river wonderfully relaxing but watching the sun dissappear behind the mountains is a beautiful way to end the day. I’ve always wanted to see fireflies and we were treated to quite the light show as we made our way back to town in the dark, with a couple even joining us onboard. They really are like nature’s very own Christmas tree lights. 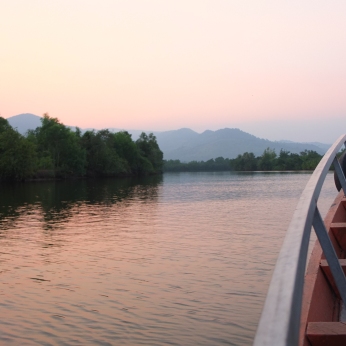 Bokor Hill Station- we had been looking forward to visiting Bokor Hill Station, a former French resort town that was taken over by the Khmer Rogue and later became the site where Vietnamese forces fought to put a stop to the genocide. Unfortunately, it was a bit of a let down. Morbid as it sounds, we had hoped to see the bullet holes in the old casino which we were told about on our last visit to Cambodia. Since then, a new resort and casino has opened and with it a new road, plenty of tourists and a plastering job to the old casino that makes you feel as though you’re simply walking through a half built building instead of an abandonded and destroyed once-grand hotel and casino. The old church however was worth seeing.

The tour, which was only $12, also included another sunset cruise, this time on a larger boat with a bar. No complaints there.

Four villages bike tour- we love bike tours and on this occasion our tour guide was a farmer from a village between Kampot and Kep. Riding through various villages surrounding Kampot we stopped to watch fishermen, try cashew nut fruit & tamarind, and meet a local family that produce palm sugar. Unlike the palm sugar at home, the Khmer variety tastes a bit like toffee and has a cookie dough consistency.

We also stopped for a fish and noodle curry and a scrumptious local dessert similar to a donut coated in sticky maple syrup.

More eating- we ate some good local dishes at Samon Village and Captain Chim’s but the standout meal during our time in Kampot was without a doubt the BBQ ribs at The Rusty Keyhole. The feature beer also happened to be Coopers Pale Ale which you can imagine pleased Niall immensely. Please note, I did not eat all the ribs in the photo below myself.

Epic Arts Cafe was also a great spot. As well as serving up good food they employ deaf or disabled staff. The menu even comes with some sign language to try with your waiter.

Next up, much less relaxing Ho Chi Minh City.